The Internet can be a scary place… Miley Cyrus discussions, beauty pageant contestants and cancer statistics.

Cancer has been on this planet a long time. Early cancer descriptions were found on Egyptian papyrus and Hippocrates, “father of medicine”, has been credited with recognizing the difference between benign and malignant tumors. And one family of dinosaurs, the Hadrosaurus (a duck-billed herbivore cousin of T-Rex), had cancer.

But what does the Internet have to say about *my* cancer – cervical cancer:

I am a huge advocate for gaining knowledge and the Internet can be a great tool. However, for a newly diagnosed cancer patient, it brought me fear and anxiety.

None of the information on the Internet has made my cancer disappear and none of it has made it stay. After living with cancer for two years, I focus my Internet searches to cancer blogs, You Tube videos on applying eyebrows and general cancer support in my area. And yes, cute animal videos and heart-warming stories of human kindness. 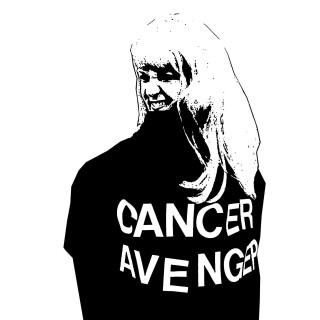 I am a California mountain mama, wife, sister and daughter who is living with recurrent metastatic cervical cancer. I am a Cervivor Ambassador. I advocate for HPV and cervical cancer awareness to shatter sigmas of ‘below-the-belt’ cancers. My mantra is #moresunnydays because living with cancer is all about counting your sunny days.

Repost from @iamcervivor
Join Carol’s Cancer Avengers!
The elusive PumpkinJesus spotted during this most festive of all holidays, Soup Season! #thingsinmyneighborhood #pumpkinhead #soupseason #pumpkinjesus #mountainlife #santacruzmountains
“In times of deep darkness, we not only need light - we need to be light for one another.”
Loading Comments...